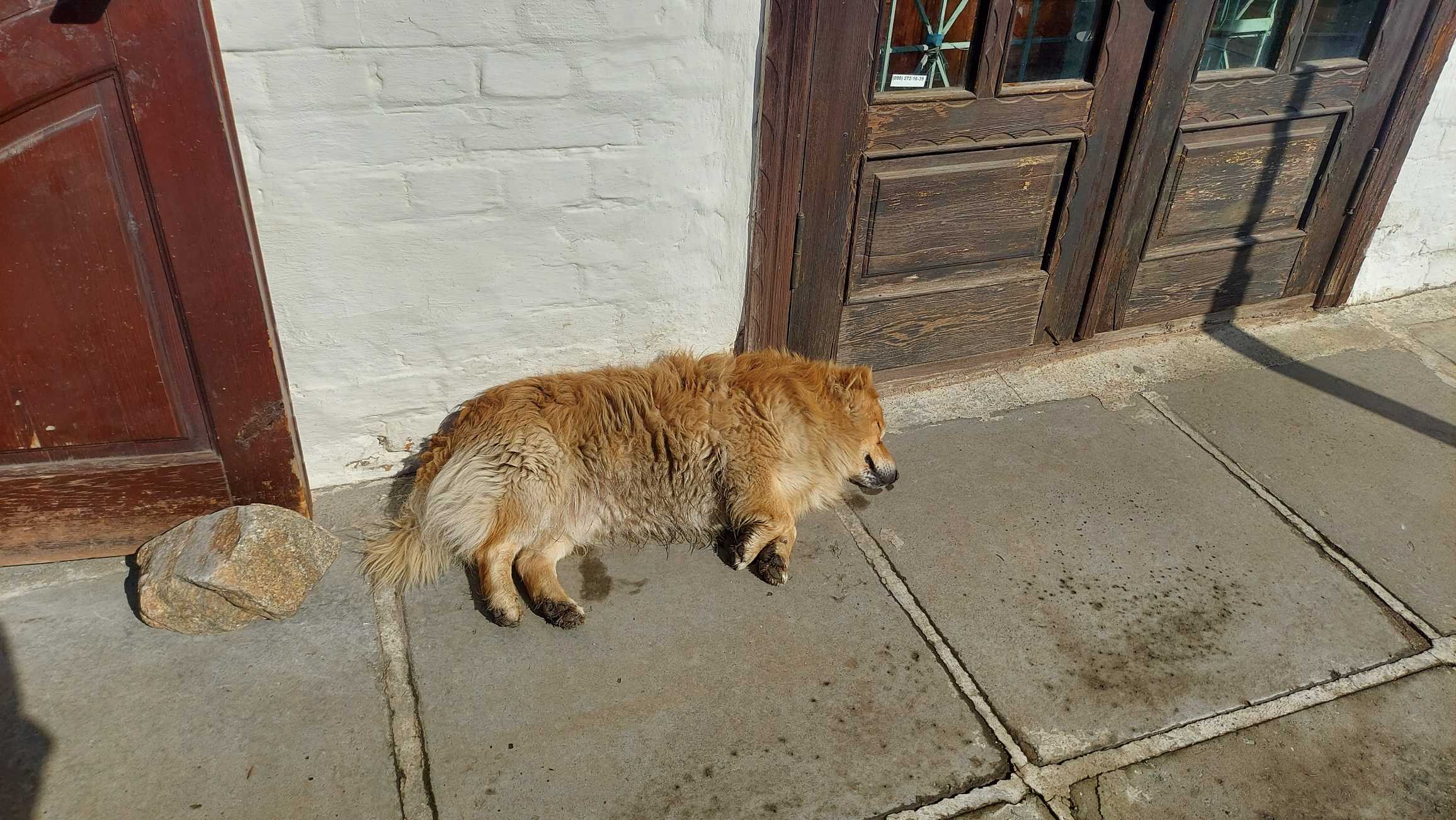 #War­Diary 3: From nomade to a settler

16th day of war in Ukraine. I was very much sur­prised as I read “third week of war in Ukraine” in one of my emails. After the third day of war I wrote that it felt like the third month of war. But then time stopped. Every day I feel like it were the third day of war. Every day is somehow similar. I never know which day it is and always get sur­prised when I acci­den­tally see “Wed­nesday” or “Sunday” on my phone. But it is dif­fi­cult to sur­prise me with atro­ci­ties that the Rus­sian bar­ba­rians are con­ti­nuing every day. Three days in a row I watch in TV from time to time all the scenes in Mariupol, Sumy, Baryshivka…etc…with no emo­tions, alt­hough Barys­hivka is rather close to my place. I hope that Rus­sian troops still find it not reasonable to waste bombs for my town. The last three days I almost don’t wake up at night and sleep well: Most of my fri­ends managed to leave all the dan­ge­rous places, so I don’t follow online noti­fi­ca­tions about air alarms. Also, there are no bomb alarms at my place any more, at least for now.

The grea­test relief I felt was at the moment as I knew that my friend’s par­ents managed to leave Kharkiv. I somehow thought, it had not been pos­sible any more. However, my friend Olga (I changed her name, just in case) managed to orga­nise their whole trip from Kharkiv to the very west of Ukraine being in Berlin and gui­ding them all the way through from hell to peace, by giving ins­truc­tions on mobile phone. They had been sit­ting under shel­ling in a base­ment for at least six days. On March, 6, the super­market in Olga’s resi­den­tial area was shelled at noon while people were buying food. One woman lost her leg. In the news they said that 15 per­sons were injured and 4 per­sons died. Olga heard sto­ries from her neigh­bours and saw some pic­ture of the scene after which she cannot see the red colour wit­hout shudder. She told me that there were pieces of human meat. Now she has been living in Berlin for several years, but she went almost every day to that super­market when she was at school. Other buil­dings in her neigh­bour­hood were also bombed down to earth and some people were buried dead under ruins. “How can I live now when all my memo­ries from my Kharkiv are des­troyed?” – she asked me and I didn’t know what I should answer. My lovely TV tower in Kyiv which I thought to be des­troyed after one of the bom­bings turned out to have survived…

Any way, Olga’s par­ents managed to escape this hell and I hope that my psy­cho­lo­gical sup­port and some infor­ma­tion about the route and curfew hours, which I could find in some chats with fri­ends and social media posts, were of some help. It was so strange to hear Olga tel­ling me (being in Kyiv region) in WhatsApp call from Berlin “We need to find out if there is still a bridge near that town in Pol­tava region.” I asked ano­ther friend, whose par­ents live in Pol­tava region, about that and she con­firmed to me that the bridge was still there.

Olga’s par­ents tried to cross the border twice after stan­ding many hours in a line, but both times wit­hout suc­cess, because her father is 59 years old. Olga told me, he looked like he was 70 and his hands trem­bled: he had done a lot of hard phy­sical work as a builder. Men under 60 years are not allowed to cross the border. “Is it an argu­ment that I have bad health, if I have no teeth?” – Olga’s father asked his daughter on the phone. Finally, my col­le­ague helped to find a room for these two exhausted people in a wes­tern Ukrai­nian city over­filled with “refu­gees” (I still cannot call Ukrai­nians refu­gees, so I use “”), where they had to get used that people didn’t switch to Rus­sian while tal­king to them. Just in time as Olga’s father despera­tely decided to go all the way back to Kharkiv where he has a house, which he had built with his hands during all his life.

During the first days of war I had to look for com­fort words as Olga felt guilty because she didn’t manage to per­suade her par­ents to leave Kharkiv before the war. She was sure, there would be war weeks before, but her par­ents wouldn’t leave. Some­times we have to admit that we are not respon­sible even for our dea­rest people and that they are capable of and entitled to taking decis­ions by them­selves even if these are wrong decis­ions. I learnt it in ano­ther con­text, so the pain back then pays off as an argu­ment which I use now to calm down those fri­ends whose par­ents don’t want to leave Ukraine. But I still remember as Olga called me one day before the war and asked me if I knew how to get from Kharkiv to Berlin and if the law on state of emer­gency was already in force. Accor­ding to this law, her father wouldn’t be allowed to cross the border or enter any air­port (we didn’t know exactly). I thought, it was not neces­sary to escape the country back then (it was several hours before the war started) and that there wouldn’t be war or at least that it was not likely…Later she told me that many of her fri­ends (who are 20 some­thing now) left Kharkiv several years ago, because they didn’t feel safe living so close to Russia.

With every person who left Kyiv, Bucha, Kharkiv or even Ukraine I felt more reli­eved and even cheerful. My grea­test worry is now the par­ents of my friend in one eas­tern town who don’t have any food in their town, alt­hough it is still quiet there. So now my usual ques­tions to her are: “Is it quiet? Is there still food?” “There is com­pe­ti­tion to get bread, but for­t­u­na­tely they have some pota­toes and canned food.” – my friend ans­wered today. Of course, I also worry about blo­ckaded Mariupol and other towns, but this is some­what dif­fe­rent fee­ling. It is like big dark abs­tract suf­fe­ring which I cannot change. Thou­sands of people thrown back by vio­lence to stone age.

In con­trast to all the people, about whom I feel so happy when they leave and reach safety, I would feel rather sad if my two fri­ends, who are staying not far away from me, would leave their place. It feels so good to know that they are not far away. With every friend who leaves a rela­tively safe place, I ask myself “And what about you?”. I rejected several offers to leave Ukraine or at least move to the west. I don’t know how rea­li­stic these offers were as I don’t have a car and there are no trains close to my town. Apart from that, I cannot drive a car. So it would have been a quest to find my way to respec­tive evacuations. 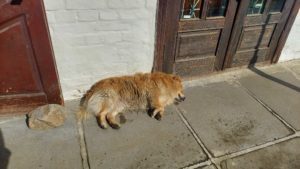 Before the war, I thought it was more important to learn to dance beau­tifully as soon as pos­sible than to finally get my dri­ving licence. I started my dri­ving course in December 2019 and then in January 2020 I started a new job. Anxiety about being always available on my new posi­tion and corona somehow inter­rupted my enthu­siasm (I really liked dri­ving a car). And then I started to learn dancing. In Ukraine dri­ving schools give you two years for lear­ning and taking the exams. So yes, game over. Also, ano­ther reminder that your needs are much more important than any job unless you are a sol­dier or a doctor, of course. Dri­ving a car is now to my mind one of sur­vival tools. It feels espe­ci­ally dis­ap­poin­ting after my dea­rest German friend offered me with lots of enthu­siasm in her voice to buy a car and send it to me so that I could drive to Ger­many. The same friend who didn’t stop moti­vating me to get myself tog­e­ther and get that dri­ving license. It would have been romantic, if it were rea­li­stic. Alt­hough I admit, my ina­bi­lity to drive a car is not the only reason why it’s not possible.

Many fri­ends abroad offered to me and my par­ents their place to stay. Moreover, a big part of me and my life is already in Berlin: I still have a lot of my belon­gings at cel­lars of my four fri­ends. I didn’t manage to bring them to Ukraine as I sud­denly got an intern­ship offer in Kyiv and later a job. Until now (and still, for obvious reasons) I actually didn’t want to bring them to Ukraine, because I was never sure that I wouldn’t go back to Berlin where I had stu­died and worked for several years. That would mean that I would have to trans­port that staff again back from Ukraine to Berlin.

I always told that Ger­many and Italy were my second mother­lands and missed them every six months. I also regu­larly had Fernweh (German word for “wish for tra­ve­ling or living far away”) and wanted to leave it all and start explo­ring new cul­ture every two years. After 2013 I moved to a dif­fe­rent country every two years. I had thought it was boring to live in your own country, because there were not enough for­eig­ners and inter­cul­tural chal­lenges. I have never had a cosy apart­ment and I always tried to buy as few things as pos­sible to be able to move imme­dia­tely and wit­hout regret to a new place.

I cannot and don’t want to move. Here are some thoughts about pos­sible reasons which come to my head:

- The most appa­rent one is that my home town is not Bucha or Mariupol or other town being bombed or blo­ckaded right now.

- I don’t have children to take care of.

- I want to stay with my par­ents as much as pos­sible. They don’t want to move…yet. My father may not leave Ukraine even if he wanted to (he doesn’t). I don’t want to hear about the pos­sible suf­fe­ring of my par­ents from distance. I’d better share it with them. We already share it, but for now it is a rather light ver­sion of suf­fe­ring: We still have food, water, hea­ting and first of all peace.

- But the most important reason for sudden dis­ap­pearence of my cos­mo­po­litan spirit is pro­bably this Eng­lish pro­verb “My home is my castle”. I feel myself the most powerful here.

- Not less importantly, I want to leave my country because I want to and not because some idiot decided to invade it.

- Apart from that, my life seems to have no sense wit­hout Ukraine. Right now I don’t see any meaningful future for myself except for wri­ting down my impres­sions from this night­mare, which still doesn’t appear real to me.

Of course, I don’t exclude that if it gets more dan­ge­rous, maybe I will still change my decision. On some days I do feel like a maniac were approa­ching my home or like there were a monkey with a gre­nade close to me, as my home is not far away from Chor­nobyl nuclear sta­tion. But I do rea­lize that it’s rather irra­tional fear. In the first days it was so strong that I was pretty sure that I was doomed to death. Now I think it’s 70/30. 70% likeli­hood that I will survive.