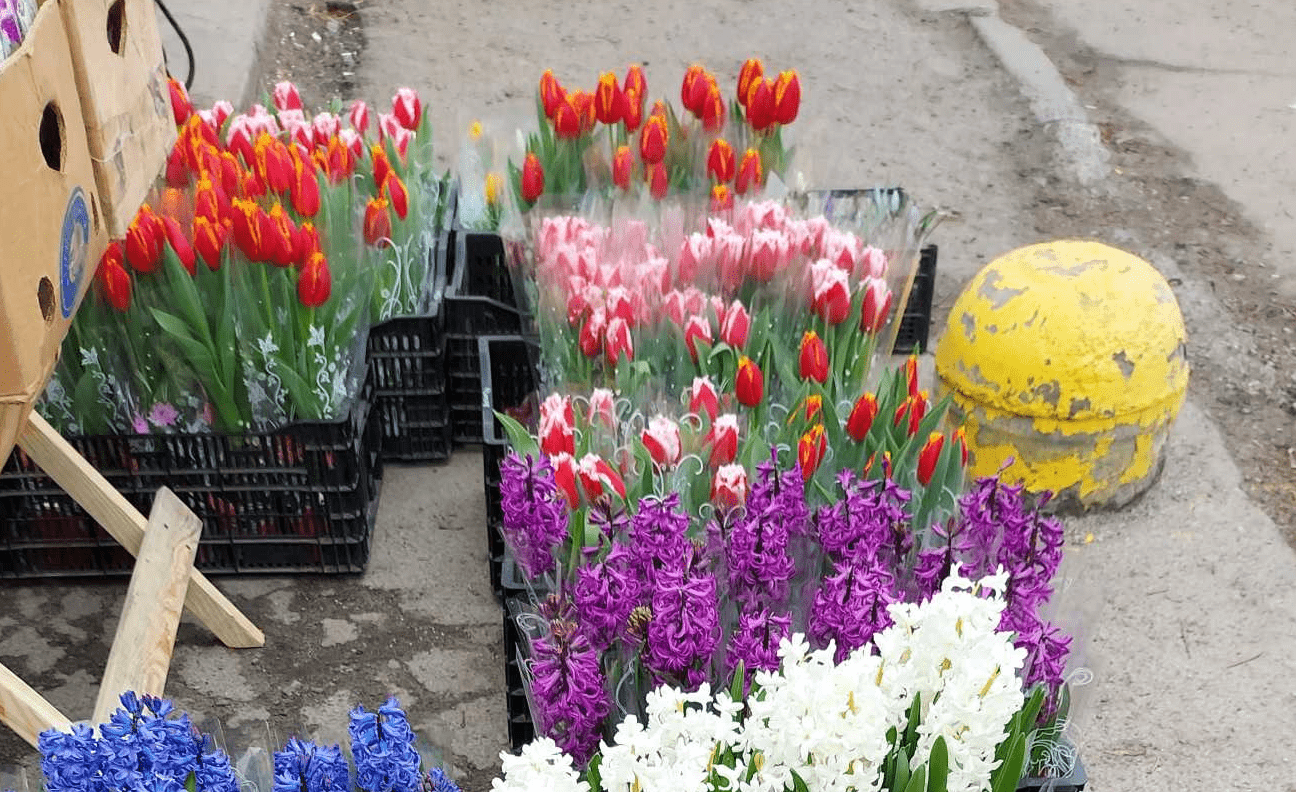 In the last two days I finally managed to get out of the digital world of my phone and out of my flat. I ans­wered almost all my for­eign and Ukrai­nian fri­ends how I was and how they could help. I finally managed to talk to my two school tea­chers (who are also my best fri­ends) by phone about how the war would look like in our town jud­ging from the Second World War and about their per­cep­tion of today’s war (they have many rela­tives and fri­ends in Russia, so it was espe­ci­ally infor­ma­tive). I also managed to have a bitter written WhatsApp dis­cus­sion with my best Ita­lian friend about the can­cel­la­tion of Dostoyevsky seminar at an Ita­lian uni­ver­sity. Both con­ver­sa­tions were my most painful and per­plexing expe­ri­ence since the war started. It is so strange that per­sonal opi­nions hurt me so much deeper than the general situa­tion. Nevert­heless these red spots on the map of Ukraine showing the Rus­sian mili­tary pre­sence also hurt like real bloo­dying sores.

Anyway, I had a pre­text to leave my flat and to get my eyes off my mobile phone, because a friend of mine who is hiding from war some dozen kilo­me­tres from my town, asked me to buy a back up cat food for her two cats. I made fri­ends with this dance tea­cher shortly before the war started. We had tried to com­fort each other after dance classes in Kyiv centre that there would be no war, hugged each other and then ended up esca­ping it and staying several dozens kilo­me­tres from each other. Acci­den­tally. Now we are asking each other every day in Tele­gram: “is it quiet at your place?” and it feels so good.

People were wal­king around the town and buying staff. In every shop you could hear some­thing like: “Are you going to deliver more car­rots tomorrow? – I don’t know, we deliver as long as we can. But I cannot pro­mise any­thing.” “Before the war” (i.e. before February, 24, 2022, but let’s be honest, the war started 2014) onions cost 8 UAH/kg and now they cost 18 UAH/kg and at some places 40 UAH/kg. Very few shops have credit card ter­mi­nals, but you can transfer money with your mobile phone app to the bank card of shop owners almost in every shop. SMS informs the shop owner almost imme­dia­tely that money arrived and then you can take your car­rots or onions. So you can still sur­vive wit­hout cash, as opposed to Berlin 😉

As for ugly war phe­no­mena, they are also not missing: A milk farm pro­vided free milk for people, but some per­sons decided to take some and sell it after­wards. Now this milk farm is sel­ling milk for 5 UAH. We also got free eggs from an egg farm. My father refused for half an hour to go and take some, because to his mind, these eggs were meant “for poor hungry people”. But as lite­rally ever­y­body took them, there was plenty of them and nobody could gua­rantee us that we would have money or food in the next time, he finally fol­lowed my advice and took some eggs. To be fair, now I eat much better than in Kyiv, because my mother is coo­king a lot. In Kyiv during last months, I couldn’t even manage to buy food at super­mar­kets, because of work and plenty of dance classes.

At the shop with food for pets, I got to know that people were still buying brushes and other staff for their pets in spite of the fact that “it was not the right time for that” as one of the buyers expressed her thoughts loud deci­ding if she should buy a brush for her dog.

Now I have back up cat food for my friend from Kyiv. It feels pecu­liar to me, because my par­ents never gave spe­cial food to our cats. Today I risked to lose it, because my cat sniffed it and managed to open the cabinet where I have hidden it. It feels so nice that now my friend and her boy­friend have a pre­text to visit me: I have back up cat food for their cats.

I was sur­prised to see that flowers were sold at several places as I walked back home. I was even more sur­prised that people actually bought them, in spite of all the uncer­tainty. Inter­na­tional Women’s Day is deeply rooted in Ukrai­nian con­sci­ence, despite the fact that many cri­ti­cize it as a Soviet “heri­tage”. Espe­ci­ally in dull pro­vinces: I am sure, people will never do wit­hout it. I also was sur­prised that it started to snow. Before the war it was get­ting warm and I had thought that spring was irreversible.

Near my house I saw my father’s friend with a gun. Alt­hough I recently changed my atti­tude to wea­pons and now I regard them as pre­re­qui­site for peace and means of saving human rights and lives, the sight of a gun made me feel uncom­for­table. I noticed that while wal­king through our main street, I looked at all men like poten­tial defen­ders and tried to app­re­ciate visually their strength and health. I also smiled more to people and people smiled more to me than before the war. In my little town we rarely smiled before, unless we saw close fri­ends. These smiles seem to me like small dia­lo­gues “We are in shit, aren’t we? We’ll get through it!” – “Sure”.

My father came home after work and enthu­si­a­sti­cally told us about the sto­ries of his fri­ends who just left Irpin or Kyiv how this or that exploded…“I met so many old fri­ends,” – he said with joy.

During my two walks in my town these days I looked atten­tively at all the dull and hor­ribly loo­king buil­dings and their appearance com­forted me. There is also one old public buil­ding with broken window glasses which nobody reno­vated, because there is no money. Grey sky. An old Soviet tank as a monu­ment near the river. It seems like the war has already been there. And I don’t think that this war can make it much worse. Ever­y­thing already looks hor­rible. Also, the reason why my com­pa­triots always com­plained about our town (there is lite­rally not­hing here), sud­denly became our advan­tage. There is almost not­hing to bomb, so there is not­hing to fear. It would still be better, if my family lived in a small house. I don’t feel safe in a four-storey building…But I am so happy to be born and live in this dull pro­vince in a rela­tively big distance from both Russia and civi­liza­tion “bles­sings”, as opposed to people from Bucha, Irpin, Kharkiv, Kyiv, Okhtyrka, Sumy, Mariupol, etc.